The Legend of Grand Country

It was early in the history of America, Pioneers were loading up their wagons to head into the west. At that time, the west was considered anything past the Ohio territory. There were many tall tales being told by mountain men fresh from the hills of the Ozark Mountains. Tales of Indians, gold and treasures galore. They also told tales of a beautiful, breathless place nestled in the mountains. This mysterious place was called Branson. “It’s a blessed country”, some would say. Others swore that music sounded sweeter there for some odd reason. Those sweet sounds of the mountains would one day become a legendary treasure.

These tall tales caught the ears of Grandpa Grand. He decided that he and Grandma were heading west. Just where out west was still a mystery to him. He just knew he was going.

As he sat in front of the barber’s shop, it was his turn next. He listened silently as stories were exchanged about this blessed new land. He was so taken by the stories that he decided from that point on he was heading there. He went home and informed his wife, “We’re heading to Branson, by golly to that unknown Missouri land.” Once his mind was made up, it was as if a burden was lifted off his shoulders.

Their first month on the trail was awful. It rained something fierce. In grandpa’s notes he had written that he was halfway expecting a fish to come swimming by on the trail any minute. There were more times than he could count, when Grandpa knew for “sure”, he had no idea where he was, and “that was mighty unsettling”. Shear perseverance, and down right stubbornness kept him going. Not wanting to admit to Grandma he was lost also played a part.

I guess some things never change.

One day, Grandpa met the Indians face to face. The meeting happened at an inconvenient time since Grandpa was down by the river all tangled up as he was trying to fish. Later Grandpa told Grandma, “Dear, I just don’t know where these mountain men have been, but they were the nicest people I ever met!”

Up the mountain trail they went, following the Indian’s instructions. Soon he came to the foot of a mountain with a stone that resembled a horse’s head. He turned left (as were the instructions) and trudged up the trail.

Grandma thought he was a ‘navigational’ genius.On the first day, Grandpa and Grandma, met a couple of prospectors. He leaned in to listen to their conversation, “Gold! Gold! There’s gold up in them there hills”, one shouted. The others just nodded their heads and laughed. Grandpa kept silent. He just knew he was going to be rich!

They rode on with a heightened sense of nature.

On the third day, Grandpa and Grandma arrived. “My, my, it was truly magnificent!” It was hilly; full of trees and breath taking even with no man made structures to be found. There was one downfall, to get water you had to head down to the stream. When Grandma realized this she turned to look at him, as only she could, and loudly declared, “This ain’t going to be easy living!” That’s when Grandpa started working double time to build a cabin for the two of them.

Once settled that fall, Grandpa started mining. Never one to take the easy road, he started his mining with just his trusty pickaxe. Most beginning miners would have started out in a cave — not Grandpa., he took his axe and started in on the face of a rock behind his cabin.

By January, he had made it a whole, whopping two feet! Unfortunately, he didn’t find any gold.. “yet”!

All the next spring Grandpa labored and mined, while Grandma entertained pioneers, and settler families that were heading up the mountain. There were so many guests; she approached Grandpa about building some additional rooms onto the cabin for guests. He did it! By the next spring, Grandpa had added 10 more rooms, plus enlarged the kitchen for the expected travelers. Grandma decided to charge a fee for room and board, but that didn’t deter business. People were only too happy to pay for a hot meal and clean, comfortable beds. Capitalizing on her good idea, Grandma said, “We don’t have to mine anymore, we could both be Innkeepers.”

Grandpa and his wife settled in quickly to their blessed life as Innkeepers. In time they had a big family and many, many guests, more affectionately considered, family! The Grand home had a door that was rarely closed to travelers. Everyone was welcome to have a place to stay and eat one of Granny’s good meals. The home grew room by room, as more visitors took advantage of the Grand Tradition and word spread about this “Grand Country.” In fact, they were feeding so many friends, Grandma began running out of room to seat everybody for her fine home cooking. Seeing the need for more room, Grandpa organized a “barn raising” like never seen before. He got the men folk together and built the biggest dining room the Ozarks had ever seen! With all this room, Grandma decided she’d cook up a mess of food, set it out, and let folks eat until they couldn’t eat anymore. Thus began the, “Grand Country Buffet”. Ozark folks knew where to find the best home cooked meals around.

Grandpa lived by a set of rules he called the, “Grand Plan” that he set for his family is a tradition to carry on:1. Be kind to people2. Hungry people need to get fed.3. Don’t throw away nothing you can use.4. Be hospitable and open your home for others.

Following these rules, Grandpa decided to take all the things he collected from trips and holidays with Grandma, and decorate the buffet with it. The family keeps up the tradition today. You may see memorabilia from Grandpa’s first cruise on the Mississippi or Cousin Haddie’s visit to the Grand Ole Opry or even the big vacation to Hollywood, California. As Grand Country gets bigger, he has shared the opportunity to see all the exciting things everyone has done. Whether it is a famous autograph or program, or a lock of Hank William’s hair from that unforgettable trip to the Opry, the family history is on the walls of Grand Country Buffet.

Well after folks had full stomachs, the front porch of the buffet became the gathering place to pick and sing some of the sweetest music these hills had ever seen. People would bring in guitars, banjos, jaw bones or anything else which produced tones and began a tradition of front porch “pickin’ and grinnin’”. From toe-tapping country favorites to soul-stirring gospel songs, Grand Country was the place to be. Although Grandma and Grandpa loved hearing the music, watching the enjoyment it gave their friends and family was the real reward.

These Friday and Saturday night ‘singings” began to attract more people than Grandpa’s haybales could seat! Then one day, Cousin Haddie came to town for a home cooked meal and a front row “haybale” to hear the mountain folks perform their music on the porch. Much to her dismay, so many folks showed up, she couldn’t get near the music. She was fit to be tied, so she sat Grandpa down and began convincing him he needed to build a barn to house this wonderful music. Grandpa bought into it and land was cleared for this new music barn. After a lot of hard work, it was finally done. In appreciation of Cousin Haddie’s inspiration, Grandpa let her name the place. After several ideas, she did it! And to this day, “Grand Country Music Hall”, is known for great music, knee-slappin’ comedy and wholesome family fun! Grandpa loved the Ozark music so much, he built a tribute to the mountaineer musicians who inspired his music hall. In front of the Buffet, Grandpa erected a huge fiddle. If folks couldn’t smell the vittles being cooked up inside, all they had to do was look for the fiddle to find the way to good eating. Grandpa, always one for doing things right, felt the fiddle wasn’t quite enough. So right next door, he built a banjo bigger than any corn silo you’ve ever seen! In fact, some folks say it’s the largest banjo in the WORLD!

Through the years Grandpa’s family grew, grand kids, great grand kids and so on. With all the commotion of the Inn, the Buffet, and the Music Hall, Grandpa had forgotten about all those early rumors of finding gold in the Ozark hills.

One summer day, instead of a usual afternoon fishing trip, Grandpa pilfered around his shed until he found his trusty pickaxe. Wondering if those mysterious fables of gold had any truth to them, he decided the afternoon was perfect for gold digging. He took a short walk to the old abandoned mine next door to his homestead. With visions of hitting gold, he began picking at the rock when all of the sudden he hit the mother lode. Gold? No! He hit a gusher! That’s right, water!!!!! Gallons and gallons and gallons! Even Noah himself probably didn’t see anything like the amount of water discovered by Grandpa. Always finding the positive in everything, Grandpa had an idea for capturing this water. Knowing how Ozark folks loved to swim, he began digging holes around the mine to hold the water. Before you know it, young and young alike were swarming the place! As the fall approached, cooler temperatures were keeping people from plunging into Grandpa’s water. “Kids have to swim”, retorted Grandpa! Thus construction began on a new barn, bigger than anything Grandpa had ever built. With the help of friends and family, Grandpa built a barn right over the top of his swimming holes. With the water covered, Ozark folk’s could swim and play year round!

Although gold was never found, the Grand family found their place in Ozark Mountain Country. Mining good times and great memories of friends and families who visited from around the world became the mission of the Grand Family! To this day, Grand Country Square guests experience Branson’s hospitality in “Grand Ozark Tradition”! 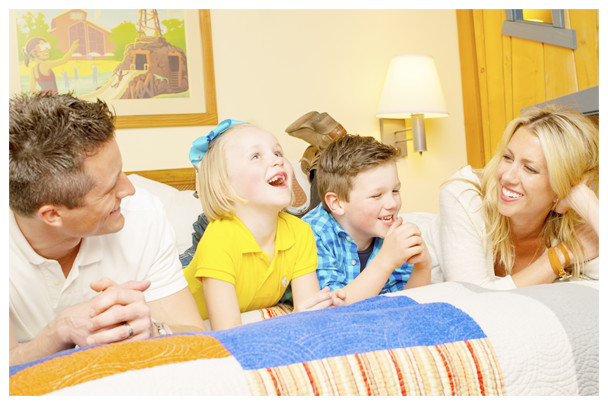 Platinum Club members get access to exclusive, last minute deals that aren’t available online. It costs nothing to join, so sign up today!

Included With Your Stay